A new, muscular type of technology is growing on the plains. It puts biometrics, artificial intelligence and machine learning to work — helping workplaces operate more efficiently and keeping workers safer. See how Kansas City is capitalizing on this growing sector. Click here for the full article from Occupational Health & Safety

Can your company afford not to implement wearable technology as part of its HRI prevention program?

Until now, the world at large wasn’t speculating on the occupational impact of climate change. However, organizations like the Department of Labor, OSHA, NIOSH as well as President Biden, by issuing new heat rules for worksites, are making the issue of dangerous heat impossible to ignore. Heat risk to workers and companies has caught the attention of many organizations and international media because it now kills more Americans than any other weather-related event, and it has been injuring workers quietly for many years.

Wearable technology can detect HRI symptoms that are hard to diagnose on work sites for several reasons:

Symptoms may not exist. Many people who experience HRI state that they “feel fine,” until they get dizzy, pass out and fall down.

Symptoms may be hard to identify. Fatigue and nausea may be misinterpreted as caused by food illness or too much alcohol the previous night. Temperament changes and lack of attention may be attributed to stress or a bad day. Unsteadiness and dropped items may just be simple mistakes. Muscle cramps may be mistaken for overdoing it the day before or a hard workout at the gym. Yet, each of these things are signs of HRI.

Workers may have been incorrectly trained. Research indicates many people believe that, if they are sweating, they are safe from HRI. Workers haven’t been trained to know that this is not true.

Symptoms may impede one’s own ability to self-identify HRI and react. Impaired judgment, disrupted cognitive function, lack of focus, inability to make decisions and poor comprehension could impede a worker’s ability to detect heat risk on the body.

Workplaces may not be watching for HRI. Heat assessment indexes and weather warning systems may not reflect variables specific to workplaces, such as metabolic heat production from work tasks, clothing layers, PPE, heat generated from machines and materials, etc., leaving workers unaware of their risks. Some assessment indexes may even use antiquated versions of heat indicators. Body-Worn Sensors Could Keep Responders Out of Heat Danger

Click here for the full article from Government Technology

The physiology-based heat-sensing technology monitors core body temperature and alerts the sensor’s wearer and a supervisor if the worker is in danger of a medical incident from heat exposure.

President Biden recently tasked the Occupational Safety and Health Administration with developing new rules for heat safety among workers, calling attention to an ongoing problem that is only projected to get worse with a warming climate.

This means workers who labor outside, such as construction workers, industrial workers or any who face potentially harmful temperatures. And that includes first responders, who know all too well the dangers of becoming overheated, especially firefighters.

Firefighters routinely risk their lives entering dangerously hot environs with no way of knowing when to stop and cool off. The firefighting industry has been teased by technology, such as wearable heat sensors, but few departments across the nation have them. The technology is now available, and at least one company is marketing sensors it says fit the needs of firefighters.

Kenzen makes wearable devices that monitor core body temperature and can alert both the worker and a supervisor if that temperature begins to reach a danger zone. The device has been tested thoroughly and has been used by firefighter training schools, as well as major oil and gas companies working with training crews.

“Typically we do not monitor our own body heat other than through normal human awareness, which often is late to indicate that we may have a problem,” Floyd said. “At large or long-duration events, Incident Command will have a rehabilitation group set up to monitor firefighters once they exit the host zone.”

He said the biggest challenge would be the change in culture. “Firefighters are action-oriented and driven individuals, who when given a mission to search for possible trapped victims, they push their bodies and many personal warning signs aside to accomplish that mission.”

Heidi Lehmann, who founded Kenzen, acknowledged that “band of brothers” mentality and said the ability for a supervisor to monitor workers, and also monitor conditions as a whole through a dashboard, could help break down that culture of not wanting to opt out and take a break when fellow firefighters are in the battle.

“They don’t want to be the one person sitting down in the shade if everyone else is working,” Lehmann said. “So the safety manager also looks at the team to see if an alert has been ignored or if somebody is ready to go back to work so they can intervene.”

Lehmann described the device as being at the intersection of workforce safety technology and heat science and climate tech. It’s physiology based, with the front end of the platform worn on the worker’s upper arm. It samples the worker’s physiology about every five seconds and collects tens of thousands of data points per work, per shift. That data translates into a message to the supervisor about the risk the worker is undergoing.

Lehmann founded Kenzen in 2016 and began commercially deploying the devices in 2020. In between there was a lot of research and development being done both in and out of the United States, including with sport teams such as the San Francisco 49ers. There are about a thousand of the devices around the globe, with the biggest verticals being construction and mining.

Last year, a record-breaking year for temperatures on Earth, there were more than 200 million Americans under heat advisories. With every 10 degree Fahrenheit temperature increase, causing a 393 percent increase in hospitalizations for heat exposure.

Click here for the full article from Safety Solutions 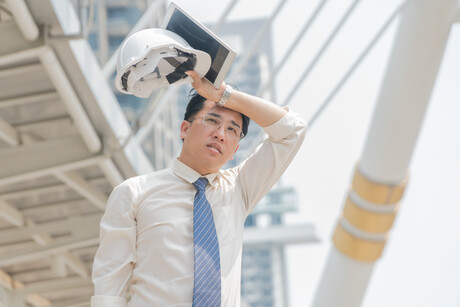 Record-breaking temperatures in 2021 led to increased worker deaths, from produce pickers to construction crews and garbage collectors. In 2022, tech entrepreneurs have addressed the issue by finding innovative ways to track and prevent the dangers of heat on the body. Heidi Lehmann, a tech entrepreneur whose latest venture Kenzen produces a wearable device that monitors workers’ physiology to predict and prevent heat injuries and deaths, said that progressive employers are already incorporating technology that can track worker wellness. Kenzen has equipped first responders, miners and workers in the construction, energy, steel and manufacturing sectors with sensors that continuously monitor their physiology to assess core body temperature, sweat rate and exertion. Lehmann welcomes legislation that will mandate the care needed for overheated bodies — such as breaks, water and cooling techniques — yet warns that standards should not be ‘one-size-fits-all’. Biological sex, fitness, age, acclimatisation and other individual factors can dictate what each worker needs to stay safe and productive.

“Heat monitoring is key to achieving ‘Total Worker Health.’ Every person has a different threshold for being able to withstand hot temperatures and hot work. Across-the-board mandates will not curb the alarming statistics. Advanced technology for a personalised approach needs to be part of the solution,” Lehmann said.

Kenzen sensors gather thousands of data points per worker per shift. Through research and validation with universities and use of its system by more than 50 companies, Kenzen has amassed a large dataset of continuous core body temperature. The Kenzen device warns workers, via haptic vibration, when their physiology indicates danger of heat stress. Managers get an alert via an app when a worker needs an intervention to stay safe. A second alert indicates when the worker’s body is ready to resume work. Corporate safety leaders can use the analytics dashboard to make enterprise-wide decisions to minimise heat risks, reduce injuries and improve productivity. They may also adjust work schedules or assign certain tasks to individuals. Throughout the process, personal data is protected, as only workers can view their health information while others only see what is necessary to keep workers safe. “Worker heat health is at the forefront of industry in 2022,” Lehmann said.